A Little Knowledge of Cigar Boxes

1. Upman is the first brand to use a cigar box

Allegedly, Upmann is the first brand to pack cigars inboxes. Upmann was born in a German financial family. Around 1840, the Hermann brothers persuaded their father to open a bank branch in Cuba. Herman received a double benefit: not only did the bank achieve significant success from the beginning, but Upmann's brother was a cigar enthusiast-he moved to Havana. Soon after, Upman began shipping cigars from various Cuban factories to Europe. He was the first non-Cuban to use his name as a cigar brand in Havana. The cigars were made at the José Martí Factory in Cuba at that time. Upman himself often printed his name on the cigar box as a gift to the officials and best friends and found that the effect of this method was very good. Okay, so I decided to use my name as a trademark, which has remained unchanged from 1860 to the present.

2. The cigar box was authorized by the United States in 1863

In the middle and late 19th century, the number of Americans smoking increased at an alarming rate, and the number of factories in the United States also increased day by day. Because at that time there were not many government regulations governing the production of cigars. Therefore, the US government decided to formulate a set of policies on cigar production, packaging, and sales. By that time, cigar manufacturers had sold their products in small wooden boxes (like Upmann). In 1863, cigar box packaging was made mandatory. According to Tony Hyman at www.CigarHistory.info, the strict rules and regulations will be revised again in the next 24 months, which will limit the capacity of each box to 25, 50, 100, 250, or 500 cigars. The material of the cigar box is only allowed to use glass or wood. A few years later, the tin box also received permission. By 1878, the government relaxed the policy. When creativity and wisdom broke free of the law, new cigar packaging was born like mushrooms, and various packaging materials were also used, such as cardboard, plastic, aluminum and Brass, ceramics, leather, and other combinations.

Gradually, most of the cigars were packaged in a box, so taxes began to become standardized. In 1804, the tax on cigar imports from the Caribbean or Europe was $ 2/1000. Today, according to the regulations of the Federal Alcohol and Tobacco Trade and Taxation Bureau under the US Treasury, there are also many cigars with a tax rate of 52.75% of the sales price at $ 402.60 / 1000 is the upper limit.

3. The cigar box can make a good musical instrument

Nowadays, the cigar box has become a legal container. Once the cigar in the cigar box has been smoked, we have to find ways to reuse it properly. And our clever ancestors had long thought of the trick to deal with empty cigar boxes. As early as during the Civil War, soldiers made them into violins in the barracks for entertainment.

The so-called "original" instruments, just like the cigar box guitar, or cbg, they are the key to the development of the Blue Army. Although the artist has the ability to create music, he cannot buy a real musical instrument. So they decided to start making it themselves. Considering that the cigars were cheap and a large number of cigars were being produced, there were also a large number of empty cigar boxes. Shane Speal, the king of cigar box guitars and the current leader of the CBG renaissance, is the key to the history of cigar box guitars and violins. During the economic depression, they revived a homemade instrument.

In the age of hard work, an old cigar box, a shabby broomstick, and a pair of screen wires were enough to make a simple guitar and sat in front of the porch leisurely playing blue ...

Although they may be the most primitive, in the past decade or two, cbg has a strong recovery trend-attracting a large number of senior 6 string players. Ronnie Wood of the Rolling Stones has used it in a 2016 album; Paul McCartney, playing with the Foo Fighters on the TV using a 4-string cigar box small guitar on the TV; ZZ Top blues-rock band guitarists Billy Gibbons and Tom Waits (Tom Wizz) Ed King (a member of Lynyrd Skynyrd) are also using these instruments. The Buddy Guy's playing career also began with the self-made 2 string "Diddley bow"; the blind Willie Johnson learned the technique of 1 string, and he is known to the blues as an unknown musician. 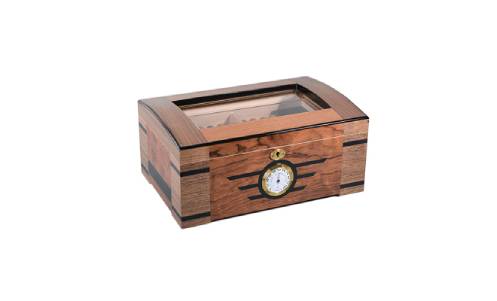 4. The secret of the Cuban cigar box code

When it comes to custom cigar boxes, you have to mention the cigar box on the mark that is helpful to identify the age of cigars and their collection value.

Sometime during the tobacco industry in Castro's "nationalization" of the island, some English printing appeared on Cuban cigar boxes. After 1960, the Cuban logo was replaced with Spanish, and the word "Hecho en Cuba" began to appear in norms. On the cigar box. By 1985, Francisco Padrón, an American Habanos company, had created an encryption system that only allowed factory workers, distributors, and retailers to determine factory information and time about cigar production. Within 4 years, "hand-made" replaced "completely hand-rolled". In 1994, the cigars exclusively produced and released by the Cuban Tobacco Company were monopolized and replaced by the newly formed Habanos s.a., so they gave the logo on the box the name of the new company.

Padrón's code system uses a combination of numbers and letters. Some factory codes for specially made boxes have internal numbers and letter codes that play a vital role. Many factories rely on this supportive tracking system to identify production problems such as large amounts of damaged or missing tobacco leaves and to remain vigilant for cigars rolled with specific tobacco crops in specific years. In addition, the code system has also made great contributions to preventing Cuban cigars from being forged.

Our company is a professional and experienced manufacturer of luxury packaging boxes, which solves the difficulty of growing eggplant for the majority of eggplant.

Some of the reasons that set us apart from the competitors are mentioned below: