Almost every book on cigars, and every Internet forum, contains advice on regularly aerating cigar boxes. They give reasons such as "cigars release gas into the surrounding air...These gases must be removed by ventilation."Only with regular ventilation can damp places not smell musty."If I may say so, it is nonsense. The smell of tobacco belongs to the cigar, not the living room, and the more the cigar is exposed to the air, the more it loses its fragrance."As any cigar smoker will attest, over time cigars lose their aroma, which is a smell that can be smelled. The effect is especially pronounced when the cigars are stored separately in the cigar box rather than the Box. Let's first look at the following arguments that have been used.

That in itself is perfectly true. If you store a cigar in a vacuum bag, it ripens very slowly and produces a different flavor, as I've shown many times. The conclusion is that you should open your moisturizer regularly to let in the fresh air, however, this is not true. Even in a full cigar box, there is enough air to allow the tobacco aroma to ferment actively and to avoid the production of any bitter substances. Here's a simple experiment you can try: fill a well-sealed cigar box with cigars, and then over the next three months, if you measure the oxygen content of the air in the humidor during that time, you'll notice that the oxygen level has barely dropped.

Sure, cigars need oxygen to produce their aroma, but they don't use it the way plants use carbon dioxide. The cigar does not "inhale" oxygen, but rather releases ammonia into the air of the humidor (as described above), which is responsible for the "steady" smell. If the humidor remains closed, the air inside was almost evaporated filled with aromatic compounds and the evaporation will reduce (in cigar), which is often referred to as "reducing" storage (in contrast to conventional ventilation oxidation of storage), from the point of view of the pure chemical, reducing is pointless because did not occur in the chemical sense "reduction".What happens is that there is a reduction in evaporation that affects the aroma components of the tobacco, but that's what we want. Cigars should smell like tobacco for as long as possible and remain in good condition, rather than gradually losing their aroma over time. 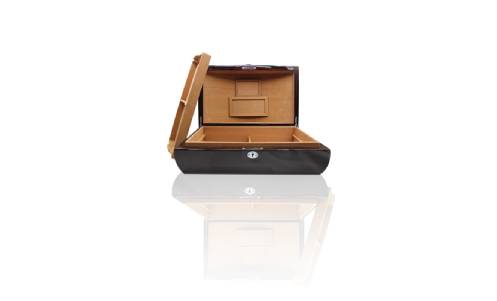 There should be a slight 'steady' smell in a cigar humidor. This is caused by the release of ammonia compounds, which is perfectly normal. Musty smells, however, are another matter. If your humidor smells like a damp basement, there are two reasons: either the high humidity has been causing mildew for some time, or the humidor is made of the wrong material (such as untreated MDF or hardboard).

If the cigar is properly stored, mildew will not develop. In my opinion, there are two reasons to recommend ventilating the cigar box: 1. The humidification system cannot maintain a constant and sufficiently low air humidity level for a long period of time; 2.2. The wrong material was used in the cigar box. Regular ventilation of the cigar box, in this case, prevents mildew, as it lowers the humidity in the air and allows the musty odor created by the use of the wrong material to "escape" from the cigar but loses its flavor.

My conclusions and recommendations

A cigarette humidor with a sophisticated humidification system does not require additional ventilation (it does in any case if you open the Humidor). If you can, store your cigar in the box and place the box in the Humidor -- this is best for your cigar. Their fragrance will last for several years and become perfect. If the hummer contains a tray, check the blowhole at the bottom of the tray. If these are made of unwaterproof plywood and solid wood, exposing a uniform light brown surface (MDF), the tray will need to be removed from the cigar box and the musty smell will be greatly reduced.