A Collection of Frequently Asked Questions about Cigars (Part 2)

Q: I noticed a powdery substance on several cigars. What is this, do you need to worry?

Answer: If the substance has a whitish color and can be easily removed from the cigar without leaving a residue, don’t be afraid. In this case, what you have is "feather" (also known as bloom), which is a natural event in which cigars emerge from some of the oil inherent in tobacco. Cigar flowering is not only a bad phenomenon, but on the contrary, it is a manifestation of proper cigar maintenance. The flowering on the surface of the cigar is actually the sugar that the cigar oozes to the surface, the precipitation of starch, the crystals of oil condensed on the eggplant coat, or the attachment of fermentation of tobacco leaves. It is a well-presented performance. It can be brushed off with a small camel hairbrush. Flowering indicates that the cigar is still alive, and its alcoholization process should be completed in the cigar box. Just wipe them off before smoking. 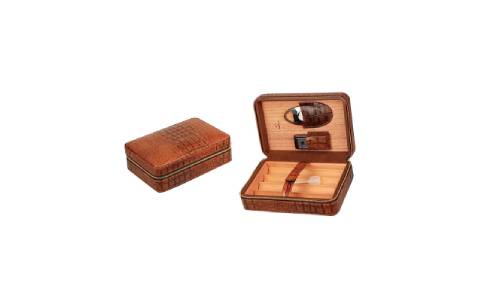 However, if the residue is bluer, and when you remove it, it will leave stains on the packaging, which is mildew. Mildew is often caused by high temperature and high humidity, so keeping your humidity close to the optimal 70 degrees / 70% humidity will help avoid this problem. In addition, mildew may be because distilled water is not used in the humidifier, so you need to know what kind of water to use.

But if the cigar is moldy, you don't have to be too panicked. Take out the moldy cigar first and avoid passing it on to other cigars. If the mold is severe, give up and throw away. If it is not serious, you can wipe off the mold with a clean soft cloth and put it in a wooden cigar box. In the end, we must maintain a better cigar preservation environment.

Cigar flowering is generally on the surface of the cigar, with a wide range of uniform white crystals. The mold of cigars starts from the point distribution. As long as you understand this, you can easily distinguish whether the cigar is growing moldy or flowering.

Question: Sometimes some of my cigars will find holes, and I see some bugs crawling around my humidifier. what should I do?

Answer: The cigar bug is one of the most destructive problems in the humidifier box. It can be said that the cigar bug is the natural enemy of the cigar. In fact, the prerequisite for the cigar bug to hatch is the temperature, and the egg will only hatch at 25 degrees Celsius! To prevent it, the temperature and humidity should be controlled first. The humidity of 60%-70% and the temperature of 18-20 degrees Celsius are the best. Cigar worm larvae are very tiny and naturally occur in tobacco, although manufacturers strive to control it because they can quickly destroy cigars and are difficult to fight. Cigar bugs occasionally appear in cigars on the market, and as soon as they hatch on cigars, they cause small round holes that basically destroy a good cigar.

But you can fight them by keeping the temperature of the hygrometer at any time, or by installing beetle traps in the humidifier. In addition, beetle larvae can be killed by freezing cigars. Just put them in your refrigerator for three days, and then put them in the refrigerator for a day. After freezing the cigar, please carefully dry the cigar slowly to avoid the packaging on the cigar from breaking.

The other bugs you occasionally encounter are wood mites – small, white insects, usually found when you open a new wooden box filled with cigars. The good news is that these mites will not cause harm to cigars, and their lifespan will not be too long, nor will they seriously damage your cigar humidor.