How Much do You Know About Cigars?

There is a noun in the world of cigars called pigtails, which has a long history. Pigtail cigar is a specific term referring to a small protrusion on the cigar's hood.

In general, the cigar cap is a smooth curved surface. In fact, the cigar is wrapped with a round tobacco leaf, and the pigtail cigar cap is a protrusion. The original pigtail cigar refers specifically to a small braid where the eggplant part is curled and spiraled like a pigtail. Now as long as the eggplant part has a protrusion, it can be called a pigtail.

The birth of pig's tail is not magical, in fact, it is very primitive, that is, the cigar did not have too many complicated processes at the beginning, and there is no specific hood regulation for cigars. After the cigar is rolled, the jacket will be slightly more and will be more. Part of the eggplant is closed by rotation. This way is similar to the pleated seal on the bun, just to seal the cigar. In other words, the most primitive cigars don't have separate hats. 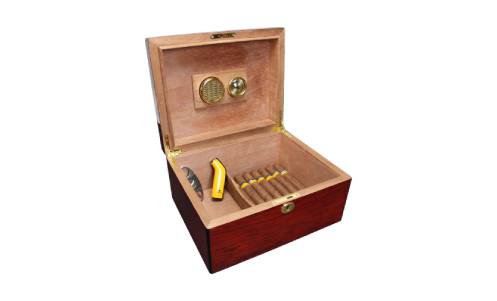 The pigtail is meant to be broken off so there is no need for a cutter.

At first, the cigar was smoked and opened at both ends; then at the other end, one end was opened and the other end was rotated to seal the cigar; finally, the independent hood design.

You can just pull the pigtail off, but I have never had much luck doing that so I use my cutter.

There are a lot of pigtail cigars, and now the most famous should be considered the Cohiba Baike series. At first, this technology was only used in high-end series such as Cochbaek, and later it was used in the high-end brand Trinidad.

In 2017, Habanos released three limited-edition cigars. They are Coxiba Amulet, Partagas One, and Panqu Generosity. The amulet is also a pigtail.

The main color is red and yellow, and the Great Wall LOGO is the main body. The combination of Chinese red and five-pointed stars shows strong red cultural feelings.

The eggplants are produced in Kangzhou, USA, and the jackets are made of Cuban varieties. The eggplants come from Indonesia, the world's leading producer of eggplant cores, and are carefully rolled with the inheritance of 132 processes. The quality of this cigar is very good, and many domestic senior cigar enthusiasts praise it.

The cigar is short in size, burning time is about 30 minutes, the entrance is slightly sweet, with the smoking taste gradually rich, and finally ends with a nutty flavor. For friends who first encounter cigars, too long aspirating time will cause oral fatigue and drowsiness. The Great Wall (red 132), taking into account the problem of smoking time on the basis of acceptable taste, is more thoughtful. Small humidors are also easier to carry and share.