There is a kind of chess, luck is as important as strategy, and chessboards areas worth collecting as artworks. It is also regarded as the predecessor of "flying chess" around the world, it is-Backgammon.

Backgammon has always been a popular game in Europe, and there have also been backgammon figures in the book "Pride and Prejudice" by British realist novelist Jane Austen.

What is backgammon? Backgammon is a game where luck is as important as strategy. The game is mainly for two players, each holding one black and one white fifteen piece, starting with a fixed arrangement, and then holding the cup to roll the dice to ensure the fairness of the throw. Naturally, rolling the dice depends on luck, but if you want to win, you still need the strategy of winning in luck. 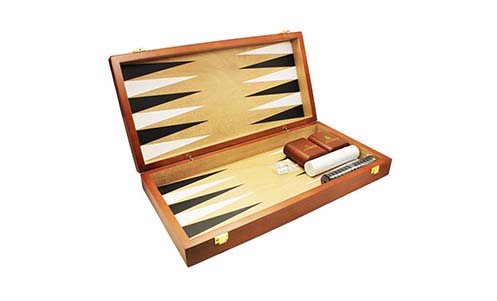 There is no unified conclusion about the start of backgammon, but what is certain is that it has a long history. Some experts believe that the game can be traced back to ancient Egypt 5,000 years ago and evolved from Senat. Archaeologists have also discovered a chessboard similar to the modern backgammon structure in the tomb of Pharaoh Tutankhamun (14th century BC). Others think that backgammon was developed directly from the ancient Roman game Tabula.

After the fall of the Roman Empire, the Backgammon Set may be introduced into the Middle East by Arab merchants, resulting in Persian Backgammon (Nardshir, or Nard). In the 11th century, the game began to appear on the European continent. Although it was unclear who introduced it, most people believed that businessmen from the East were most likely to be the spreaders of backgammon.

Because Backgammon is not a strategic game like Go or Chess, the rules are relatively simple, and the randomness generated by rolling the dice makes it interesting, making it quickly popular in the world. Come. And the competition with luck is naturally spotted by gamblers and used as an excellent gambling tool.

Therefore, the French and British nobles also tried to ban the nationals from playing this game, but there was no use. By the 16th century, backgammon had become popular with Europe, and the term "backgammon" was also included in the Oxford English Dictionary.

In the early 17th century, in order to cater to the tastes of high society, the decoration and dice cup of the backgammon chessboard was improved in Europe. Since then, the game has been widely popular in Europe, but different countries have different names for it.

In fact, backgammon was also very popular in East Asia, and even recorded in ancient Chinese books: it came from India during the Three Kingdoms period and was extremely popular until about 1000 AD. Japan, which was deeply influenced by China, was also crazy about backgammon, and even attracted the emperor's ban (645-703), but it also became the favorite "underground entertainment" of the people.

By the 1870s and 1980s, backgammon was even more comparable to the poker boom of the 21st century. In the early 20th century, a Russian noble, Duke Dmitry also invented the multiple models, which increased the possibility of gambling, which was also regarded as a rather revolutionary move in the history of backgammon evolution.

With the advent of the computer Internet, the ancient backgammon has not been hit. Instead, under the influence of the Internet, gamers can play with players from all over the world anytime, anywhere, and enjoy the fun of backgammon "random and brain burning".