The History of Backgammon

Western backgammon has been active in some online games or in the streets of Turkey and Iran.

The first thing to explain is that Backgammon is the result of constant evolution in history. The twelve-row chessboard found in the ruins of Aphrodisias in Turkey around the second century AD has twelve more checkers than the current backgammon, but it is still relatively similar. A very popular game in the Roman era, it is regarded as the predecessor of modern backgammon.

After Qianlong, backgammon faded out of China's stage, but in terms of Chinese and Western chessboard styles, it can be described as similar. The common chessboard of Western backgammon is a wooden chess box or a leather chessboard that can be rolled up and stored, which is different from Chinese dots. Checkers, backgammon checkers are extremely narrow and long triangles. But the number of checkers is 24 in the same way as in the West. Layout before the start. After placing the 15 pieces, the two players move in the opposite direction. They walk with double points and can eat each other. The first to move the 15 pieces to the end is the victory. 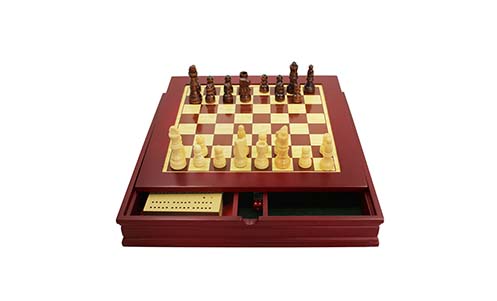 When referring to the history of backgammon development, I have to mention one of the important props-dice, and because of the participation of the dice, the gameplay of backgammon luck is greater than competitive skills, even if one side is weak, it is very likely to defeat. After that, it was used as a betting game in many places and was inseparable from this tool. In China, Cao Zhifei was regarded as the inventor of the dice and actually had the dice in ancient Egypt and Rome. In ancient Latin, the dice is called alea, and the English aleatory means "lucky", the source is the dice.

In the 11th century, backgammon was brought to Europe and then became popular in Europe for hundreds of years. However, it should be pointed out that although this game has been popular in Europe for a long time, the word backgammon appeared much later than the spread of this game in Europe. Word formation is most likely based on the roots baec = back and game = game, so we can see its figure in Western classics.

The novel of British realist novelist Jane Austen (1775-1817) reflects the appearance of British folklife in the eighteenth century. In Pride and Prejudice, the backgammon is mentioned:

So he (Collins) turned around and asked Mr. Bennet to play backgammon with him. While Mr. Bennet agreed to him, he said that this is a smart way, or let these girls play for themselves Little gadgets.

In addition, in Jane Austen's "Emma", we still see the figure of this game. For the popular entertainment method of the eighteen British squire class, until the Victorian era, backgammon still often appeared at parties.

Around the 1920s, Antique Backgammon faced the fate of being eliminated in the European and American gaming industry, but one player invented the double points gameplay, which greatly increased the psychological stimulation of gambling players. With the aid of the device, this has caused Europeans and Americans to regain their interest in backgammon.

Compared to Go and Chess strategy strategies, backgammon rules are simpler. At the same time, they are assisted by double dice, relying on luck more than skill. This also makes it introduced into the world for thousands of years. Like it, but because of this, it is often used for gambling purposes. In contrast, Go and Chess, because of pure skill, have a long history of energy.